This featured Tony Bebb who was visiting the Hamilton Bonsai Club. It was held at the Cambridge Society of Arts Studio Rooms from 2 to
5:30pm on Saturday 7 July. At the conclusion of the session several who had attended had dinner together in a nearby Thai Restaurant.
This was a good time of the year to hold this event as outside the weather was not brilliant. We had a good attendance including Peter
and Selwyn from Rotorua. Selwyn brought some pots to sell which were mostly suitable for potting Shohin.

Tony explained that we are challenged by the smaller size of Shohin – delicacy of branches and intricacy of design to achieve a mature looking tree in a small pot. For newly established Shohin we were given tips as to how to thicken the trunks and how to keep internodes between branches to a minimum. Also how to develop root systems, pruning and thinning out so that light is received by the branches and
foliage we want to encourage. Those that brought to the meeting Shohin “up to show standard” also received good advice on how to
make them better. Our aim should be to keep Shohin to the stipulated height but there are no “Shohin Police”. They should fit in a pot
which fits into the palm of your hand with fingers curled.

Tony has featured at a number of Shohin events promoted by the Hamilton Bonsai Club. I have attended most but not all. It never ceases
to amaze me the information he is able to impart at these events. I learn new stuff every time I attend. All that attended were very
pleased. I would highly recommend that if you get the chance to attend one of Tony’s Shohin sessions you take the opportunity.
Les 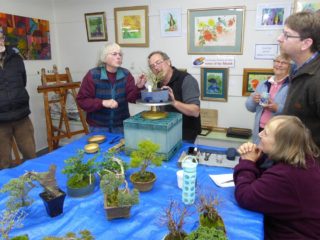 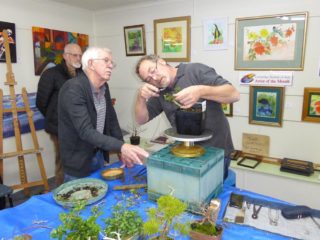